A challenging peak, usually requiring two camps above base camp.
A wonderful peak with beautiful views to Tibet and Mustang country. Many fossils can be found at around 5100 meters. 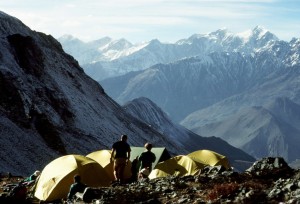 Our ascent of Chulu West was made from a base camp in a small valley north of Manang situated off the main trail to the Thorong La pass 5416m. Some of the best views of this peak are from this pass.

North-West Ridge: Go beyond the hut following the yak pastures and walk up a ridge which leads into a hidden valley where it is possible to find a good site for base camp. From this camp, ascend steep scree slopes to a col 4,900/16,076 feet), on a subsidiary ridge that leads down from the main ridge. To the north of the col ascend a snow slope for 200 meters to the base of a band of rock at an altitude of 5,100 meters and the site for a possible high camp.

Climb the rock band with some difficulty to the northwest shoulder of Chulu west 5450 meters/17,880 feet, where another camp can be established or alternatively a camp can be placed on a snow plateau above 5,530 meters/18,143 feet. From the plateau continue up the progressively narrowing ridge to the summit 6419mmeters /21059 feet. Descend by the same route.