The Tien Shan Mountains form the border between Kazakhstan, Kyrgyzstan and China are part of the Himalayas. In June 1999 after reading about Khan Tengri in the Central Tien Shan, I, with the help of Steve Eades, a fellow Mt McKinley summiteer, put together a proposed plan to climb Khan Tengri in the August 2000. We put the word about and soon had our team of six and with about eighteen months to go we prepared, planned and financed our trip. 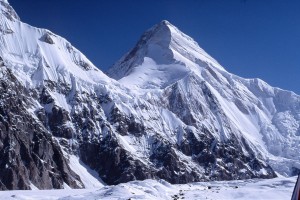 Due to the departure of the Russians when Kyrgyzstan gained independence in 1991, on our arrival we found the country in a very poor condition, with building projects, road works and housing just left half finished as there were no further funds to finish them. 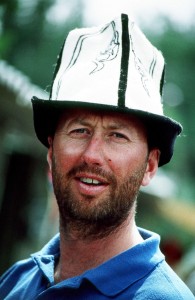 We travelled overland and by Ex military Russian helicopter to the base camp at 4000m high on the Inylchek Glacier. This trip was thwarted by very heavy snowfall rendering the mountain un climbeable, allowing us to only to get as far as the Shubins bivouac camp in the short period of time remaining. We left the camp knowing it would still be there next year after witnessing a very large avalanche on the Semenovski Glacier (the route to camp 1), knock over a team of Russian climbers like a ball in a ten pin bowling alley. Amazingly, they all survived. Rob Jones and I did return again the following year, only to be beaten yet again by more heavy snowfall keeping us at camp 2 at 5800m for five days. Out of food and out of luck we descended through deadly snow back down to base camp feeling lucky to be alive. Who knows perhaps another year.