“Five pints of bitter please” was the order in the Plough pub where we had met to put this expedition together.

It had been talked about for many months but all depended upon finding and purchasing a metal hulled yacht. Our skipper Ron Newton who had sold his luxurious Catamaran after his transatlantic trip had found the right craft The Elizebeth Victory a 36 foot steel cutter built by Oceansteel Craft of Cornwall some twenty years ago. The trip was on Lads !!! 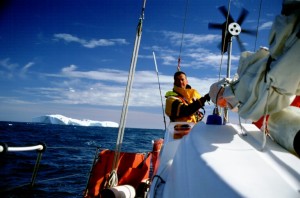 We had the boat, we had the sailors and we had the climbers, all we had to do was organize the expedition to Greenland’s remote east coast, sailing to the kangerluassaq fjord to attempt some peaks inland approaching from the coast emulating the trip by Chris Bonnington and Robin Knox Johnson in 1991. 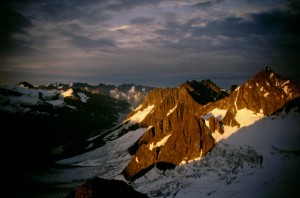 Ron and sailing pal and expert Luke Priest (both over Fifty) were to look after getting the boat ready and sailing it to Iceland from Fareham on the south coast of England, around Cornwall, the silly isles, Ireland, Scotland , The Faroe Islands and on to Iceland, leaving in May to meet us climbers in Reykjavik mid July.

The climbers Peter Watson, Robert Jones, Stewart Wright and myself Steve Lodge (all over forty Eight) have a wealth of climbing experience between us with, success’s on mountains in most ranges in the world including, Huascaran (Peru 6700m), Huapasca (Peru 5800m) Chulu West (Nepal 6630m), Mt McKinley (Alaska 6195m) Khan Tengri (Tien Shan 7001M) and most major 4000m peaks in the Alps. Peter and I had sailed many times with Ron, with peter completing the transatlantic race the year before. Our last member Tim Broad (Under forty but very tall) is hard to categorize being neither, a hardened climber or a hardened sailor. He had experience in both and joined for the adventure side of this expedition. He was in fact a very fine sailor and a great climber. 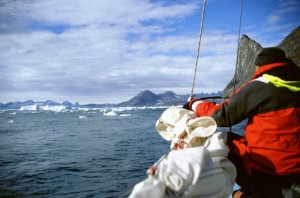 After months of letter writing, emails and phone calls, Permits were issued, Flights booked, Gun and License obtained (for the use if attacked by Polar Bear). Tents, food and Climbing gear pooled, Satellite phones and Epirbs hired, with the help of sponsorship and hard earnt cash. Sea charts, photographs and information of Greenland’s east coast from Mr Bonnington, a goal chosen, we were ready to go at last. Trip on Lads.

We flew from Stanstead Airport on July 23rd to Keflavik in Iceland to meet the boat but it had been delayed in the north of the island due to unfavorable winds. An overnight stop followed by an internal flight and a hired mini bus ride, we arrived in Dalvik to meet the boat as it arrived. After many pints of Iceland’s finest beer and a good nights sleep in some what crowded bunks on board, we set sail for Isafjordur to collect our rifle before crossing the Denmark Srait to Greenland. Bad weather, gales and rough sea forced a route change to Siglufjordur a safe harbour for the night hoping to continue the journey the next morning. We set off after breakfast and again run into very bad weather and with another 75 miles to go around the very exposed Hornstrandir Headland we head back to Sigulfiordur arriving 10.30pm tired and fed up. However the morning dawned fine and after breakfast we set sail again for Isafjordur to collect the rifle. Without this rifle our permit was invalid. Success !
Safely in Isafjordur harbour the local police delivered the rifle and sealed it below deck in a lockable container, we can now leave Iceland !! More beer and an early night.

After a last visit to the small supermarket a cooked breakfast and a diesel top up we were off, steering 300 degrees all the way. Hooray! Joy soon turned to despair, at 1AM the boom snapped, leaving us no choice but to return. With faces along as coffins we motored back to Isafjordur arriving at 8.30am tired and very disappointed. As for replacing it or getting it fixed seemed impossible as it was a Bank Holiday weekend in Iceland, it looks like trip over lads. Luck was now to be on our side, a local with a yacht moored alongside took one look at our problem and after a quick phone call his friend an engineer took away the boom repaired it and we had in place the same day. Trip back on lads.

Fifty one hours later, we arrived on the east coast of Greenland tired but jubilant surrounded by magnificent mountains and glaciers, we dropped anchor and slept. Our crossing was windless and flat calm and the motor was needed all the way. Ice bergs as large as football pitches and as high as houses floated perilously close with hundreds of smaller bergs know as growlers always threatening with there peaceful presence. We had made it, we were in Mikis Fjiord..

We had moored about a mile off the shore five miles inside Mikis fjord and used our two dinghy’s equipped with small outboard motors to ferry the tents, food, climbers and gear to set up camp on a stone beach at the end of our fjord. Our only fresh water supply was icebergs beached on the shore or floating close in. Three days behind schedule our goal was now to be one of the coastal mountains as trekking into the interior would waste too much time. We choose a perfect shape mountain, as would be drawn by kids, estimated at 3500 feet with glaciers leading down to the sea. After a night under canvas we set off early next morning in pouring rain to search out suitable routes. We climbed steadily up the glacier to a massive icefall heavily crevassed with huge seracs with Rob our nominated marksman carrying the rifle. After deciding our route we returned back down the glacier and over what seemed like miles of moraines back to camp. It is still raining. Dinner in the rain, not good but the soup lasts longer. Into bed, still raining, up early, still raining, in fact it rained for 36 hours non stop, another day wasted. The next morning was good, bags packed and boots on we set off, lets do it lads !

We returned up the glacier to the foot of the ice fall cramponed up, dumped the rifle and split in to two ropes. Pete, Rob and Stuart on one rope and me and Tim on the other. For four hours we picked our way through seracs and crevasses with some pitches Scottish grade 3. I found a fairly good line and Tim and I reached the top of the icefall shortly followed by the others who had crossed over to follow our route. The ice climbing was fantastic, with the ice in wonderful condition it was worth the journey just to play on this ice. We surveyed the rock above the bergshrund looking for a route to lead us on to the ridge. Again I was lucky and Tim and I moved together quickly gaining the ridge in about 35 minutes having little trouble with the route. However the route chosen by the others proved to be extremely loose and dangerous with the danger of rock fall evident with every move.
I lead on up the ridge and again Tim and I were moving together at all times. For a non climber he was good. There was still no sign of the others. We pitched a couple of large lumps on the ridge and decided to sit and wait for the others. Eventually they appeared on the ridge so I lead on up with Tim close on my heels. It was now midnight and the top was in sight, or was it? No need for a torch in this land of the midnight sun, so we pressed on. As we got higher the condition of the rock became more brittle and the size of the lumps got considerably larger with every foot gained, causing me to become concerned about getting off. We were about 100 meters from the top with two very large buttresses to climb. We waited for the others to catch up and they agreed we should retreat. With nothing but extremely loose rock, down climbing was impossible and good belays for abbing off were proving to be hard to find. Fixing slings, pegs and large nuts in place we struggled for about three hours to reach the safety of the solid ice. We had now spent eighteen hours on this climb and still had the ice fall and glacier to negotiate to reach the safety of the moraines. Route finding back down the Glacier wasn’t easy, but we arrived safely back at camp in one piece, despite a few near misses with snow bridges collapsing revealing huge crevasses dangling below your feet as you hung on with outspread arms and a tight rope. Sleep, beer or food ? Beer first then sleep.

The next day we walked to loosen up, to a splendid waterfall which looked about an hour away crossing many melt water streams and boggy patches displaying wonderful colours produced by the numerous small plants and lichens, arriving three hours later and returning the same way. With only one more day to climb we were up early the next day and back up the glacier in fantastic sunshine and cloudless skies to attempt a small peak reached mainly by snowfields and ice, we didn’t fancy the rock again. Negotiating crevasses was our biggest challenge which we dealt with slowly and triumphantly with a few near misses and half disappearing acts, but we successfully reached the small rock ridge of our chosen peak. Red peak, we named it as all the rocks glowed Red. A half hour scramble, up loose rock lead, us to the top of this never visited mountain, Goal!! A cairn was built it was our mountain.

A slow deliberate walk down again avoiding crevasses in the warmth of the evening sun with views across the fjord littered with Icebergs and the Elizebeth Victory moored like a dot in the distance were magnificent. We struck camp taking advantage of the warm weather and packed away dry tents. Rubbish burned or packed out, camp site cleaned we returned to the boat leaving no trace/ Who knows if any body will camp there again?

It was good bye to Mikis fjord as we set sail the following morning for Iceland, again Icebergs lay in wait as we bobbed and weaved our way out of the fjord into the Denmark strait, As we sailed south we said goodbye to the Mountains which remained ever present behind us in the distance for about sixty miles and hello to the fog, which thickened causing concern, as visibility was now down to about twenty metres, the Growlers were floating like mines around us. When on watch eyes were peering hard ahead yelling warnings of obstacles in the way hoping your watch partner steers a course around them. Dolphins paid visits racing in our bow wave and a whale rose causing Pete to change course, but after 48 hours we arrived back in Isafjodur only finding the harbour entrance with 14 staring eyes looking for bouys and walls through a pee souper of a fog. We had done it. Trip over Lads 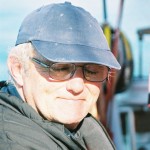 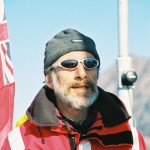 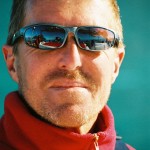 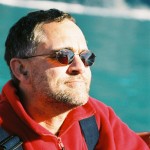 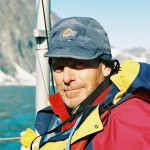 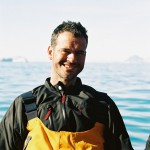