We started as a group of friends from Cheshunt Rugby Club walking and climbing in the UK.

After a heavy night drinking one New Years eve in the Torridons mountains Scotland, we summited a snow covered Bein Alligan on a freezing cold New years day morning to the surprise of the local mountain rescue team who were out on exercise. 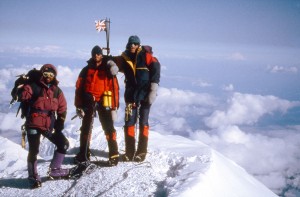 “You were the lads in the pub last night, how did you mange to climb after a night like that?”

Tongue in cheek and a severely hungover Bob replied. “We Are The Bollocks” The W. A. T. B. had arrived and a club was formed.

It changed in June 1996 to Where Adventure Travel Begins when we applied for a route on Mt McKinley in the USA and forms had to be filled in and WATB explained. I made the name on the spot, filled in the forms and permission was granted.

The four man team of Steve Lodge, Steve Eades, Stewart Wright and Ian Cuthbertson reached the summit on the 2nd July 7:30 am. A adventure holiday was born!

We self fund all our trips accepting sponsorship when offered. We do not use top hotels, avoid middle men where possible and use cheap transport or local buses to keep costs low. All trip cost are split evenly between those taking part and all group gear shared where possible. Specialist equipment bought when required is kept for future use or is donated to youth groups, Scouts or outdoor clubs. We are still friends and friends of friends of people we have met on our travel who want to do the things we do, the way we do them.